The Saga of Seal and Polar Bear, Part I

One of the things I enjoy most about being a curatorial fellow here at Shelburne Museum is the time I spend exploring the collections. I get to rummage through shelves and bins in search of delightful objects, and I’m always amazed by the things I stumble across.
Take, for instance, my adventure with Seal and Polar Bear.
Last summer I delved into our painting and print storage areas looking for pieces to feature in my exhibition How Extraordinary! Travel, Novelty, and Time in the Permanent Collection. The show opens on June 16th, and it explores the concept of novelty in 18th and 19th-century European and American art. Here are just a few pieces that will be featured: 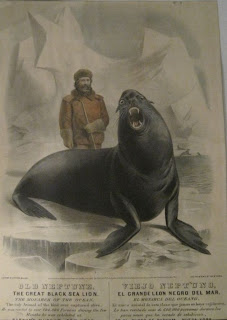 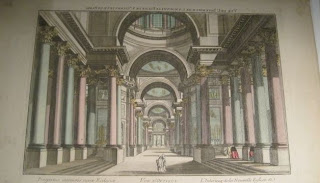 Vue d’optique of the interior of the church of St. Genevieve, Paris, 18th century 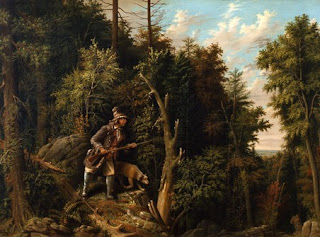 While the objects above might suggest that I just choose pieces at random, I actually follow several criteria when I’m putting together my shows. I see an exhibition as a narrative, and any piece I use has to help tell the story I want to convey. I also pay attention to an object’s condition.
What I really like doing, though, is finding the Museum’s hidden gems, those great-looking, but lesser known pieces that haven’t been shown in a really long time, if ever. Also, the weirder the work is, the better.
Imagine my delight then, when I stumbled across this…. 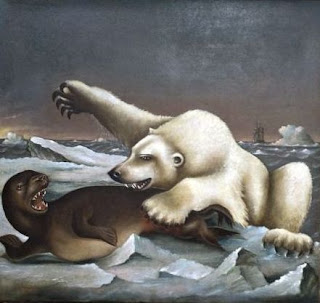 Let me introduce you to one of my favorite paintings in the entire collection. This is Seal and Polar Bear, painted by Charles Sidney Raleigh around 1881.
I was immediately taken with the work, beginning with its abstract character. I really liked how Raleigh had simplified his forms, allowing me to focus on the action. His use of color also intrigued me, particularly in the ice and sky, where you’ll find traces of pink, green, and blue.

Fine, you might be thinking, but let’s get to the point: this painting is basically a cartoonish rendition of a polar bear killing a seal. It’s full of teeth, claws, and blood. It’s violent, exaggerated, and downright weird. 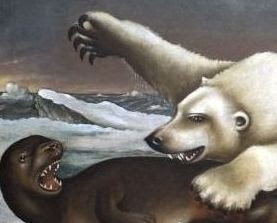 It’s my kind of painting, in other words.
I had found a really striking piece for my show, but now my real work began. I knew virtually nothing about the work or the artist, so I needed to do some research. I also needed to talk with our conservators to determine the painting’s condition and decide whether it needed any treatment. Then there was the matter of choosing its actual placement within the exhibition. My work was definitely cut out for me, but I was ready for the adventure.
Stay tuned for Part II, when I begin to share the results of my research.
Posted by scwoodbury at 10:16 AM 3 comments:

Replicating the Work of a Bygone Era: Part 2

I set out to make a new four-foot wide louvered elliptical attic vent for the Variety building, I thought I would have a technological advantage over the original builder, and would have a relatively easy time of it. The original was white pine; I thought redwood would be a more weatherproof material (and we have lots of redwood scrap in the shop from helping Randy repair the Museum's redwood picnic tables). To get the two curved pieces that form the the ellipse I needed a board over seven inches wide, and we didn't have one. Chip had some leftover Atlantic white cedar (Chamaecyparis thyoides), a.k.a Atlantic white cypress, that was wide enough, and equally weatherproof, so I made the frame from that. 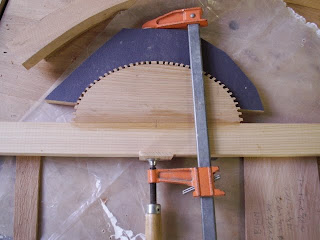 You can see the dados (slots) to hold the louvers. Before gluing up the new frame I taped the old and new pieces together and traced the location of the dados; I copied the angles with a bevel gauge. To cut them I used a fine-toothed handsaw (I prefer the Japanese style that cuts on the pull stroke), and a narrow chisel fashioned from a sharpened screwdriver. There is no easy way to do this with power tools. There are 81 of these dados on the vent, but working by hand was the only way to do it accurately. 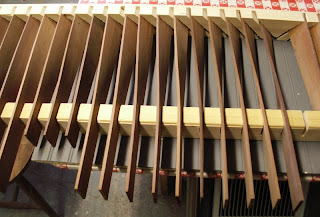 The louvers were a real challenge: the dados on the center hub were angled about 12 degrees from the face, while the dados on the elliptical frame were angled 45 degrees. This meant the louvers had 33 degrees of twist. In order to twist the new redwood louvers I soaked them in water overnight and then cooked them in a microwave oven on "high" for 5 minutes. Thanks to Mirsad for this idea! Whenever you bend wood it is a good idea to bend it farther than you need, because it will spring back a bit as it dries. I made a bending form with one row of slots at 90 degrees and another at 45, this held the microwaved louvers at 45 degrees of twist until they dried. It is unlikely that the original builder had a microwave oven, but I think he could have done this with steam, or by using green wood. 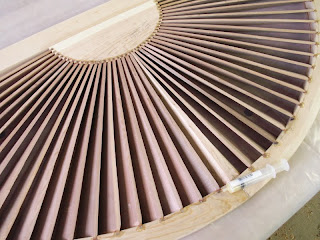 It took a day and a half to fit the 40 louvers into the frame. Each one had to have different angles cut on each end, and each one was a different length and taper. I used a block plane to make the ends thin enough to fit snugly in the dados, and used a knife and a plane to taper the louvers flush to (in line with) the frame. Instead of nails I gave each dado a shot of epoxy to hold the louvers in place. 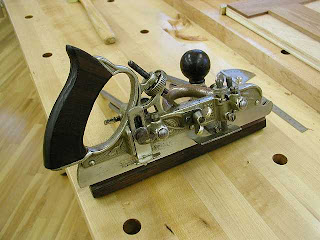 To make the trim strips that went around the ends of the louvers, I got some western red cedar (Thuja plicata) and Chip's Stanley 45 combination plane, with interchangeable cutters that can produce any shape you need. I needed to make two curved beads, one about twice as wide and tall as the other, but right next to each other. 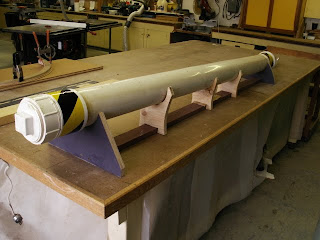 I had to bend these strips to the curvature of the ellipse and the center hub, but they were too long to fit in the microwave. I built a steam chamber by attaching the wallpaper steamer from the Conservation Lab to a length of PVC pipe. After an hour of this, the shop smelled like a sauna, and the wood was pliable enough to bend around a curved form. 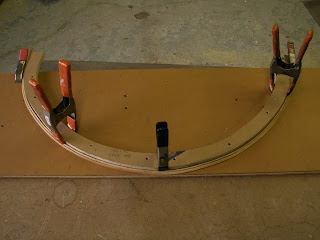 I produced a lot of kindling doing this, since the red cedar heartwood wouldn't quite bend far enough without snapping. The sapwood proved to be more flexible. The trim for the center hub was a different matter entirely. I couldn't get the trim stock to bend to such a tight curve no matter how much steaming, soaking, and microwaving; the asymetric double-bead profile made the wood twist every time. 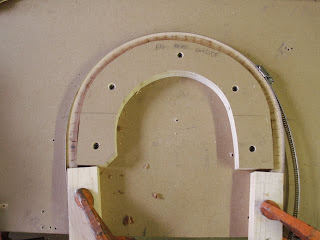 The solution was presented by the original trim pieces, which the carpenter had kerfed (notched) every half-inch to facilitate bending. I did this to a piece of square stock, then soaked and microwaved it. To bend it, I screwed blocks of wood to the ends of a long band clamp, and wedged the trim stock between them. As it bent, the band clamp helped distribute the strain along the wood and prevented it from snapping. Thanks to Chip for this design! 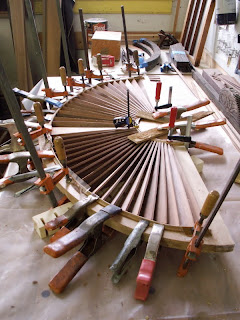 It took a lot of clamps to attach the trim to the vent until the glued dried. Then it was time to shape the center hub trim. 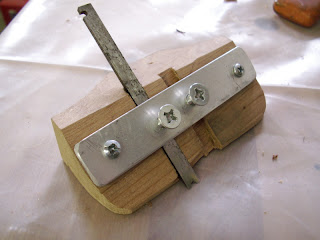 The Stanley 45 was too big to make the turn, so I took the cutters out of it and made a "scratch plane" that I could steer more easily. 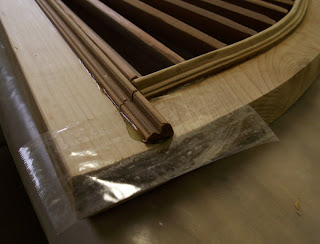 The trim pieces moved a lot as I was clamping them, so I made them longer than they needed to be and cut them to length once the glue had set. To avoid gluing the trim where I planned to cut it, I put clear packaging tape on the frame and glued the trim to that. Once it was cut to length, the excess trim could be removed by pulling off the tape. I fashioned the radial pattern on the center hub from redwood scraps, whittling them with a knife and smoothing the lines with a block plane. These got glued on as well.

Once everything had been glued, shaped, and sanded I submerged the whole unit in a trough of Flood oil and let it soak for an hour. This was less toxic than the original "finish" of creosote and lead paint, and really brought out the color in the cedar and redwood. I stapled brass screen on the back of the vent, and used the Genie lift to install it on the building. 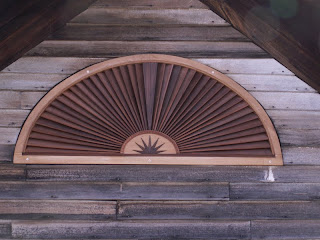 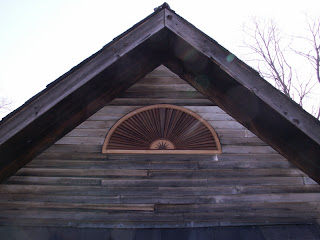 It is easy to overlook the amount of time and skill required to produce many “architectural details” on old buildings. In this case, a mere attic vent took the better part of three weeks to replicate. While the original builders may have been faster since they weren’t trying to make an exact copy of someone else’s work, they probably did not have power saws, wallpaper steamers, epoxy glue and microwave ovens. While these tools certainly made parts of the job easier and faster, there was no modern substitute for the really important aspects of making delicate pieces of wood fit together well. The bulk of the work was done with saw, chisel, and plane; patience, a steady hand and a true eye—the same way it was done by the carpenter long ago.
Posted by Rob Zimmermann at 10:27 AM 2 comments: