October is the ninth annual Art Beyond Sight awareness month, which strives to increase access to the so-called "visual" arts for people who are blind. Through programs like Art at Hand, a pilot program at the museum for visitors who are blind and visually impaired, the museum world is exploring how art encompasses far more than the eye can see. 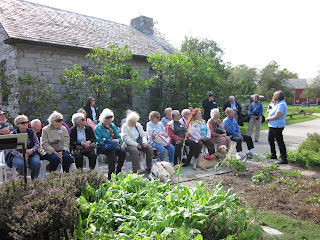 As Betsy Zaborowski, a representative for the National Federation of the Blind, has described, a blind person's white cane has the power to inspire "a lot of assumptions...and a lot of discomfort" in others. One of these longstanding assumptions is that people who are blind or visually impaired cannot appreciate or enjoy museums.

That stigma, however, is gradually disappearing. Due in large part to the commitment and encouragement of nonprofits like Art Beyond Sight and VSA-Arts as well as the National Endowment for the Arts, institutions across the country, including Shelburne Museum, are finding creative ways to make their collections accessible to this community. Educators are bringing art vividly to life using detailed verbal descriptions, tactile materials, sounds, and smells. 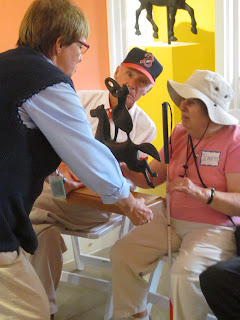 During Art at Hand's pilot season, we have offered five tours and tested a combination of strategies to capture the essence of works of art for people who may not be able to see them. In one instance, museum guide Lee Dowling presented Manet's Blue Venice. She first spoke about the colors and texture of oil paint, the dimensions of the work, and the subject matter, and then continued with a sensory description--based on her own travels--of Venetian canals filled with murky waters and spirited gondaliers. On another tour, guide Elizabeth Sabens clipped fresh herbs, including chives and lemon thyme, from the Hat and Fragrance garden as an introduction to quilting and methods of quilt preservation.

Perhaps our most memorable moment yet was a tour of the Circus Building. Guide Georgia Pendleton brought in fresh hay to capture the atmosphere of life under the Big Top, and we received special permission for the group to feel the museum's wood-carved Dentzel carousel horses. Finally, we brought them outside for a ride on our operating carousel. One visitor wrote to us: "The best part was the Merry-Go-Round ride. It brought me back to when I was a child and could see." 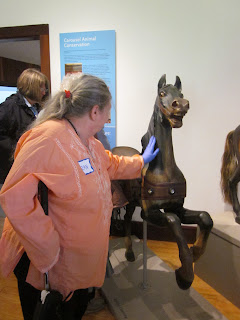 Posted by Angela Pratt at 2:14 PM No comments:

October is finally here, and I’m still having difficulty choosing my costume for Shelburne Museum’s eighth annual Haunted Happenings event. This is no light matter, as this year’s theme demands a serious, soul-searching investigation of whom to best represent from one of our culture’s most celebrated clan of characters. Yes, I’m speaking of Superheroes.

Children of all ages and abilities will fly down to the Shelburne Museum for Haunted Happenings on October 30th to take part in some super-amazing activities, such as testing one’s Superhero powers and visiting Batman’s bat cave.

Choosing a character is always a fun time for museum staff. Katy Kreiger, the museum’s administrative assistant, chose Poison Ivy – a hippie ecologist turned Batman villain, who uses plant toxins and mind-controlling pheromones to snuff out her enemies. When asked why she chose such a character Katy replied, “ Is she really even a villain? All of her activities are based on protecting the environment. Like Poison Ivy, I’m a total hippie…I think I can bring a nice positive spin on her.”

Preparations are well underway for Haunted Happenings. Renee Compagna, Family Programs Coordinator, founded the Haunted Happenings concept back in 2004, and works hard to come up with fresh ideas each year – making it one of the most popular events of the season. “Last year was our most attended Haunted Happenings to date,” Renee remembers, “even though we had the worst weather ever.” The rising popularity is perhaps owed to the creative activities that compliment past themes such as Saturday Morning Cartoons, Board Games, and Wonderland. “We’ve done themes for the past four years. It gives the different departments direction and helps us when decorating the exteriors of buildings,” Renee says.

So why did Renee choose Superheroes for 2011? To this she simply replies, “I thought that it would be a lot of fun. And, what’s better than seeing your coworkers in tights and fake muscles?”

But the real Superhero work is making sure that every child participating in this year’s Haunted Happenings receives twenty pieces of candy or trinkets. “It’s a science – I have it down to the last piece,” Renee asserts. Shelburne Museum’s mailroom will not see an end to the shipment of the large and heavy boxes of sweet stuff until Renee gets exactly 40,000 pieces.

And where is she storing these boxes for the time being? Curatorial Fellow Sara Woodbury types away at her computer while the mountain of candy boxes looms over her. When Renee asked if she could store the boxes in the space, Sara replied, “Sure not a problem. It would be a good chance to work on my willpower. Besides they’re Skittles. It’s disgusting. If it was chocolate it would be an entirely different story.”

Have you decided what you’re going to be for this year’s Haunted Happenings? After carrying three boxes of candy one afternoon, I had no hesitation declaring that I will be Wonder Woman.