Replicating the Work of a Bygone Era: Part 1

How did we go from this: 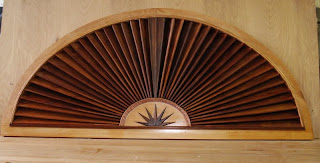 One of the challenges faced by the Museum carpenters is repairing the many old buildings here, and deciding when to replace, rather than repair something. Sometimes all we have to do is replicate how something was done 150 or more years ago, other times we can better preserve our buildings if we intentionally depart from the original construction. Either way requires careful study of the original to see how it was made, what made it last, and/or what made it fail. The attic vent from the Variety Unit was already severely weathered when squirrels tore through it. There was enough left of the old vent (an elliptical wooden fan) to see how it was made, but there was too much gone or worn out to repair it. I'd be practically rebuilding it, so I set out to make a replacement by copying the appearance of the old one while adding a few improvements. Here's what I learned about the old vent; in Part 2 I'll show you how I made the new one. (A note on scale: this thing is four feet wide, and 20 inches tall). 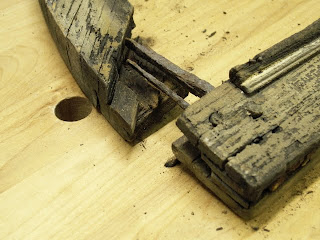 Right away I could see a few interesting details: the old vent had big square wrought nails driven through its joints as reinforcement. These were very rusty, and had clearly been in there a long time. The elliptical frame was assembled in halves, with a spline connecting them at the top of the arc. This meant that near the bottom of the arc the grain of the wood cut across the frame at a steep angle to the tenons that held it into the horizontal member--this was prone to splitting. It is easy to imagine that the frame split as it was being assembled, and rather than start over the builder just nailed it back together. 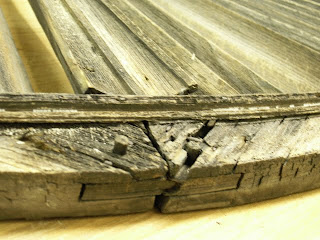 I could also see where the frame had split around the pegs that held the two halves of the ellipse to the top spline: the splits left dark marks where the spline was exposed to the weather. There were wrought nails all through this joint as well. 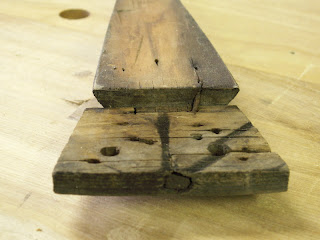 That spline was spiked to the center post, which filled the gap between the two topmost louvers. This meant that it was a three-dimensional wedge, wide at the top and beveled parallel to the louvers, yet thin enough at the bottom to fit between the louvers on the center hub. I think the spline was made from a separate piece because to be strongest its grain needed to be horizontal, yet had it been carved from the same stock used to make the center post the grain would have been vertical, and weak.

Despite the vintage fasteners used in its construction, the vent was attached to the building with round finish nails. Moreover, the white pine of the vent was much more deeply weathered than the surrounding clapboards and trim. This indicated that although this part of the building was built in the late 1940s, the vent was much older. Close inspection of the vent revealed why it was worth salvaging and re-using: all of its 59 separate pieces had been painstakingly cut and shaped by hand, and were held together by multiple tiny cut nails. The marks of a scratch awl (used to make layout marks instead of a pencil) were still visible, as were the marks of a very thin sawblade and a sharp knife. 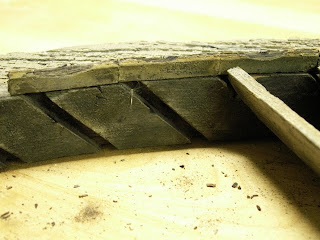 Being hand cut, the elliptical frame was not a regular geometric shape, so each louver had been custom-fitted, with a slightly different length, width, and taper. To make things even more interesting, each louver was slightly twisted (maybe they were steam-bent, or perhaps the builder used green wood?). The louvers were set in narrow dados (slots) in the frame and held in by small nails and a curved trim strip that went all the way around the frame. There was another of these trim strips on the center hub, and in order to bend it to such a tight curve it had been kerfed (cut partway through with a saw) every half-inch, and each segment had a small nail in it. 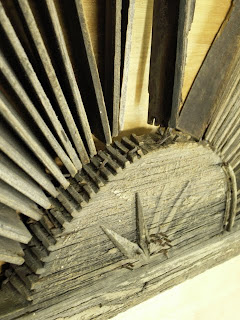 The detail on the center hub looked like relief carving from the ground, but it turned out to be made up of thin diamond-shaped slivers that were also nailed on. There were only two left, but I could see the marks left by the others where the hub hadn't been worn down so much by the weather. Each of these was slightly different as well, suggesting they had simply been whittled to shape. Somebody with a lot of patience spent a long time making this thing!
Posted by Rob Zimmermann at 11:29 AM 2 comments:

﻿
Last week I found myself  brandishing a tape measure and scale to study ceramic plates from a hundred year-old shipwreck laid out on the carpeted floor of Pleissner Gallery. This engaging, hands-on workshop was part of an ongoing partnership between Shelburne Museum and Turning Points in American History, a professional development program for Vermont educators that supports teaching in the social studies and seeks to build strong school-museum relationships.


﻿﻿
At last week's Primary Source Study Group, Turning Points Co-Director Scott McLaughlin staged an early twentieth-century Lake Champlain canal boat wreck for a lesson in historical methods. He drew a cross section of the boat as it was found in the lake on a swath of fabric and unfurled it on the gallery floor. He then laid out artifacts that archaeologists have found in different parts of the boat, including a coin, a pipe, and a handcrafted doll. The ceramic plates that we used as primary sources were similar to artifacts that archaeologists have found in such wrecks. Primary Source Study Group participants collected data including the plates' condition, function, size, and weight, and then analyzed, synthesized, and interpreted these findings in order to date and contextualize the ceramics. By the end of the workshop, we were able to make conjectures about the family that lived on this particular canal boat based on our detailed study of the "material culture" they left behind.

As a young museum professional interested in how to use art and artifacts to teach history, I have been tagging along with Turning Points study groups during their Shelburne Museum visits. I will write again soon to share the innovative ways that Primary Source Study Group participants are using what they learn at the Museum to teach with primary sources in the classroom. Hint: it involves less textbook readings and more staged shipwrecks.
Posted by Angela Pratt at 4:38 PM No comments:

My How They've Grown! 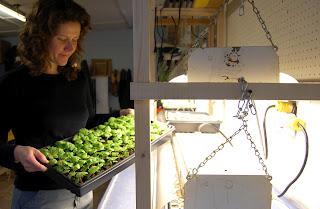 The Geranium seedlings are already 4 weeks old, and my how they've grown!

At almost 2 inches tall, they could actually produce a flower! 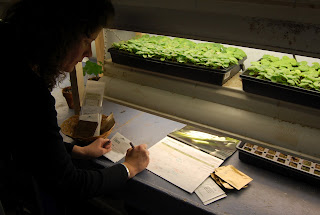 For the next 12 weeks until the planting season, I will be starting many more seedlings this very same way.

Stay tuned, it won't be long before we're transplanting them in our greenhouse!