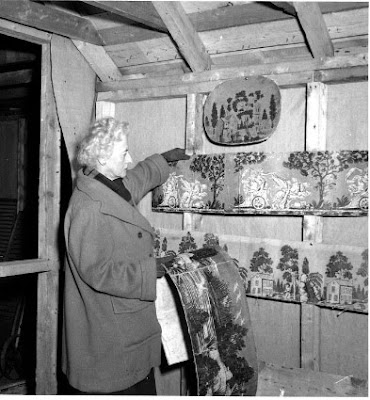 
Upcycling: transforming a useless object or material into a product of better quality or use. Downcycling: converting a useless object or material into something of lower quality or use.
There’s no doubt that Shelburne Museum founder Electra Havemeyer Webb was ahead of her time in many ways. While she collected works made by everyday Americans, not all of those objects ended up being museum pieces quite in the manner we think of today. In fact, sometimes she found new uses for historic objects in her collection.
Let’s consider the hat and bandboxes. In Shelburne Museum’s collection, there are approximately 200 nineteenth-century oval lidded boxes made of wood or cardboard covered with block printed paper designed to store hats and other accessories. Mrs. Webb began collecting them early on.

"For years and years I collected hatboxes. I don’t know why, don’t ask me...I think they are so interesting in design and also I think they have great educational value," she said.

Certainly the collection contains some with great stories, such as “Peep at the Moon” as told by Curator of Design Kory Rogers:
“Peep at the Moon” retains its original form, but other hatboxes that Mrs. Webb collected found new uses. I haven't counted how many she flattened to create decorative paneling in two rooms in her home in Westbury, Long Island. Scalloped paneling in one room was constructed of yellow hatbox sides. The other room was produced from sides and lids of blue hatboxes. More panels from flattened boxes are on view in the Hatbox Room in the Hat and Fragrance Textile Gallery. She laid out the arrangement herself while the building was being constructed in 1953. 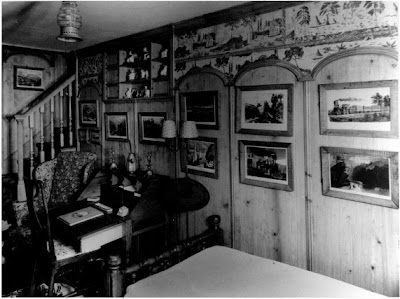 Mrs. Webb's yellow hatbox room in Westbury, Long Island
While preparing the collection during the renovation of the Hat and Fragrance building I noticed that some of the boxes had been flattened once and then returned to an oval shape later. Sadly, Mrs. Webb did not describe her criteria for conversion, but there are multiple versions of the same papers represented as both whole boxes and flattened panels. 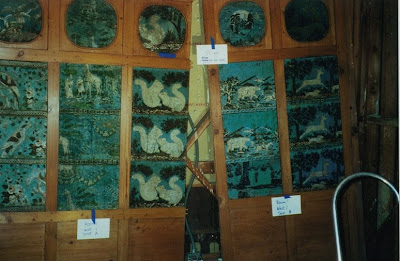 When the Webbs moved from their Westbury residence, son J. Watson Webb, Jr. took the hatbox wall paneling - a blue room and a yellow room - and installed it in his home in Los Angeles. After his death in 2000, the paneling was donated to the museum and I was part of the crew who disassembled the paneling to send it to Vermont. Like previous Shelburne Museum workmen who moved historic structures to the museums grounds, we numbered and photodocumented the paneling as we removed it from the house.

As the conservator in the crew, my job was to record how the paneling was constructed and to ensure that the paper and moldings were sufficiently stable for travel. You’ll find the blue hatbox room panels on view in the Museum's Hat and Fragrance Gallery. But the yellow room? It became the top border and backs for the trivet cases in the Variety Unit, a decorative arts gallery next door to Hat and Fragrance. In creating these cases, the carpenters added new wood to the old and didn't alter the joinery in any way. If desired, the cases could be disassembled and reconfigured as paneling once again. 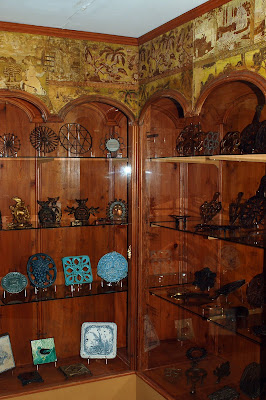 The yellow hatbox room in the Variety Unit, where trivets are on display, 2011.
Posted by Nancie Ravenel at 3:38 PM